Have You Seen Lane? 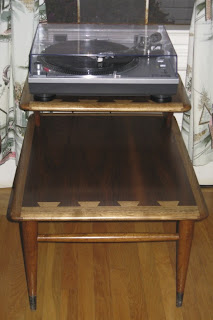 Without even trying we have started collecting Lane's Acclaim furniture series. Trust me, this was an easy mistake. With its clean lines, creative blend of walnut/oak and durability, we continue to be attracted to this dovetail design over and over again. Launched in 1963, the Acclaim series was the American answer to Danish Modern but at an affordable price. It is hard to believe that the coffee table sitting in my living room right now originally sold for $29.95. But thankfully the affordability of this series increased its popularity and in essence, its availability today.

I am sure the designers never dreamed that their two tiered end table would make a handy place to house a turntable.

Some light reading on the subject.
Posted by Rebecca on Thursday, September 30, 2010