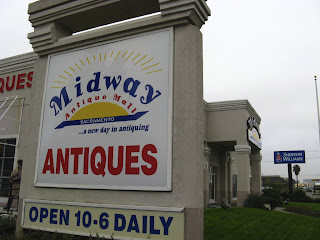 I went to Disneyland today. Well, Disneyland for those obsessed with mid-century living. Since we couldn't have our much anticipated garage sale due to rain, David & I decided to check out a store a that his friend, Dick, warned us about. The rumor was that one hadn't really seen mid-century furniture until they had visited Midway Antique Mall in Sacramento, CA. So off we went. 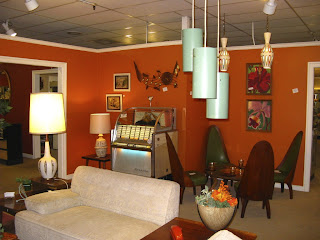 The moment the front doors opened I felt as if I had just entered a time capsule and was now standing in someones living room in 1957. And best of all was that the Walt Disney of mid- century furnishing (owner: Mark Saunders) gave us a personal tour of his front show rooms. He may do this for everyone who enters the doors but it made me feel like a celebrity. His stories about how Midway came to be were the highlight of the tour for me. 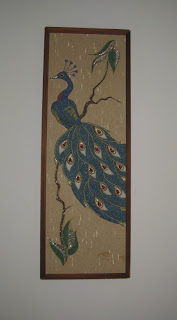 We did take home a peacock art piece that apparently was a type of "sequence beads by numbers" art project from the 50s. Despite the popularity among craft lovers back in the day there isn't much about them online. David recently bid on an unused one on eBay so if we are lucky we will see firsthand how our lovely peacock art panel came to be.
Posted by Rebecca on Tuesday, September 21, 2010

The low stakes should be made by roulette gamers who do not wish to overspend and are careful with zkwlsh.com their money. Novice gamers also needs to|must also} use low stakes and place a small bet for starters. Note that it's solely too straightforward to overextend and bet ever-increasing sums of cash. It is why it's important to take care of up} your discipline as you play roulette. Only wager the amount you'd really feel comfy losing in one of the best online roulette on line casino.