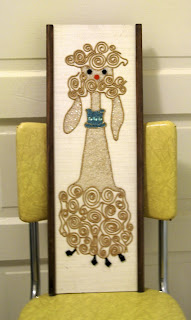 I had one of those moments again when I spotted something on Etsy and knew it was meant to be mine. Not a huge fan of poodles (more the bulldog type) this particular dog with its unruly curls was too tacky to pass up. Plus, it helped feed a relatively new obsession of mine - Gravel Art.

DIY gravel art kits were the rage back in the late 50s early 60s. Being the late bloomer that I am, I first discovered this craze when I bought my first panel at Midway in Sacramento earlier this summer. We now own five of various themes.

Unfortunately my web search did not uncover much in terms of how this fad came to be but thanks to people like SuZanna Anna these kits are still alive.
Posted by Rebecca on Thursday, January 13, 2011

The laser selectively fuses powder by first scanning the cross-sections on the surface of a powder bed. After each cross-section is scanned, the powder bed is lowered by one layer thickness. Then a new new} layer of material is applied on Air Purifiers prime and the method is repeated till the thing is completed. While additive manufacturing-specific levels are pretty new, universities have lengthy been utilizing 3D printers in other disciplines. There are many educational courses one can take to have interaction with 3D printing. Universities supply courses on things which might be} adjacent to 3D printing like CAD and 3D design, which can be applied to 3D printing at a sure stage.