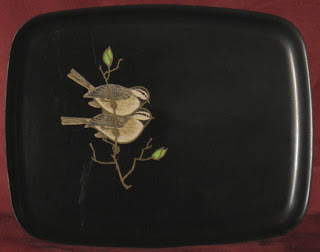 I had never heard of Couroc of Monterey until I found this tray last week at a Goodwill in Antioch, CA of all places. Made of black resin with a wood inlay, this sweet little tray caught my eye immediately. Thanks to marigold05's helpful history lesson on eBay, I discovered that the Courac Company was a joint venture of Guthrie Courvoiser and his wife, Moira Wallace, from 1948 until Guthrie's death in the 1970s. The company continued under various owners until its closure in the early 1990s. In its hay-day, they partnered with several artists to create various inlays from whimsical to classic.

Don't just take my word for it. Discover for yourself the world of Couroc on Flickr. I think I see a collection in the making.

Email ThisBlogThis!Share to TwitterShare to FacebookShare to Pinterest
Labels: Courac of Monterey, Goodwill